The idea for this weekly excursion to Iceland was encouraged by my sister, Meha, at a well-loved Tex-Mex restaurant a few weeks ago. Summer was in high gear (and it’s still blistering in Houston). We were dining in the evening, in an air-conditioned room, our glasses packed with ice. She was sitting across from my little guy, a sizzling cast-iron skillet piled high with grilled fajita meats on the table between them, casually explaining how the unique country is a study of contrasts.

For my little guy, the allure was certainly heightened by Iceland’s location in the Atlantic Ocean. It’s flanked by the miles of blank seas, yet it is still a stepping stone between the New and Old Worlds that are North America and Europe. (If you’ve noticed, he’s fond of island nations—so far, we’ve explored Seychelles, Madagascar, and New Zealand).

He was even more intrigued when I explained that despite its name, ice is rare on the vast island—mostly found as large, sapphire glaciers that run alongside active volcanoes and hang above verdant valleys and charcoal-black beaches. That the barren landscape is likely the youngest in the world—and gives us a hint of what the Jurassic period may have looked like. That it isn’t as cold as you would think being just outside the Arctic Circle thanks to the North Atlantic Current—but that the winter brings the magical aurora borealis and the summer, a midnight sun. And more stunningly, that the people persevere there, despite the earth’s constant stirrings and its extreme conditions—taking dips in its hot springs, and even making electricity from magma.

As I began to outline a menu—I was, predictably, daunted by Iceland’s culinary heritage that stretches thousands of years beyond the Vikings. From everything I read, the country still celebrates its “old” culture. That tribute highlights a heritage that emerged from periods of scarcity, and includes offal dishes, fermented shark meat, dried fish, and scorched sheep heads. Today, though, the country has developed notable livestock industries despite the harsh winter, including sheep and cattle. It also has rich fishing grounds in the North Atlantic, where cool and warm ocean currents meet—and it is dedicated to sustainability of its stocks. And, blessed by volcanic soil, it depends a variety of quick-sprouting crops outdoors—including kale and cauliflower—or tubers—potatoes, carrots—and more recently, rapeseed and barely. (Iceland is also notable for its produce grown in greenhouses that are heated and lit with geothermal energy).

So as a first course, I went with a simple, rustic soup that I read was commonly available throughout the island—in the southerly lowlands, where temperatures can range from just 32F in the winter to 55F in the summer, as well as in the highlands, which are cooler. The soup’s base is a vegetable broth that is made more aromatic by the essence of mushrooms, onions, and garlic. To this is added potatoes, cauliflower, and kale. The original recipe calls for rolled oats. We skipped that step only because oats have been rough on my system, but I can imagine the nutty, creamy texture it might have added.

As an entree, we went with arctic charr, broiled, but shielded from the intense 500F heat by a scallion crust. It took multiple calls to a variety of supermarkets to track down arctic charr, a cold-water fish related to salmon and trout (WholeFoods was the lucky hit). Like salmon, arctic charr breeds in fresh water, but it is can be anadromous, which means it travels out to arctic or subarctic coastal waters. And like salmon, it has a bright red to a pale pink flesh that is loaded with omega-3s, but it is comparatively characterized by a more delicate texture, and a cleaner, sweeter flavor. Icelanders tend to confit it, or sear it to get crispy skin, and I even saw an interesting recipe for “torched” arctic charr. We went for a simpler preparation: Slathering the deboned fillets thinly with mayonnaise and then packing it with chopped scallions before broiling it a few inches from the burners just until slightly charred (about 6 to 8 minutes) left the fish flakey and moist, and an absolute keeper. We’ll be on the lookout for arctic charr deals from here on out. 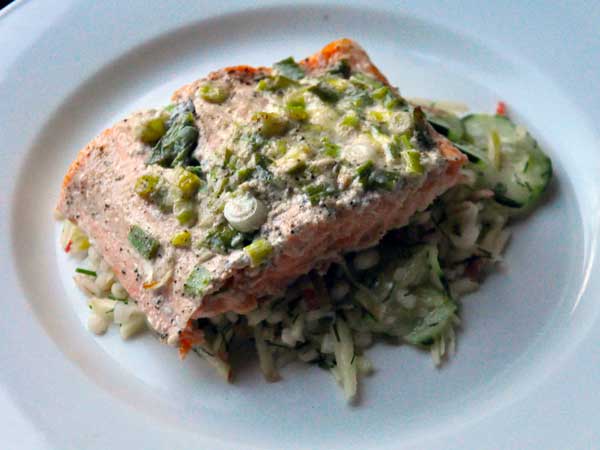 A quick study of the country’s local produce was all that was needed to settle on an accompaniment to the arctic char: a quick salad of barley (Wholefoods only had Italian barely—believe it!), shaved fennel, cucumber, and apples, that was dressed with a heaping tablespoon of horseradish and a squeeze of lemon. Next time, we’ll definitely go heavy on the horseradish, and perhaps add a caramelized element—perhaps moving to brown the fennel. Still, it was memorable. So memorable, that despite our attempts to take a photograph in good light, we missed our window and shot in twilight. Maybe it adds some authenticity to the photo. What do you think?

Dessert has become an event on our vicarious adventures, and Iceland was no exception. During my research, I uncovered many beauties: cocoa soup, sugared curds (from a fermented milk product called “skyr,” which I’ve got to try!), muffins, pikes, cinnamon rolls, and chocolate cake. The one that captured my attention was the vínarterta, a seven-layered prune torte that is typically made at Christmas time. According to food blogger Laurie Bertram, members of the Icelandic diaspora (mainly in Canada and in the U.S.) tend to fiercely guard the recipe’s authenticity, never wavering from the “sacred trinity” of prunes, cardamom, and shortbread. But European bakers use a wider range of fruits (strawberries and rhubarb, mostly) to make another version of the torte (randalín).

For our own journey, I started out with this excellent recipe from Port and Fin, but abandoned the cardamom at the outset (it’s an odd thing but no one here particularly enjoys cardamom) and kicked up the cinnamon. In my haste to get the “cookies” in the oven, I also forgot to put in the eggs. (I’ve probably infuriated an entire world of vinarterta traditionalists at this point). But, the gorgeous torte still emerged in all its beauty. And, I might add, without eggs, the almond and vanilla–scented confection with dried fruits and spices would be a big hit during Diwali.

Notably, while every recipe I read said the torte is designed to last at least a two months in an airtight tin where it gets softer and more delectable, my limit was three days—Houston is hot and humid, and food gets moldy in a snap. A mkarvel of texture and diversity of flavor, this one was certainly a keeper.

This is a text widget. The Text Widget allows you to add text or HTML to your sidebar. You can use a text widget to display text, links, images, HTML, or a combination of these. Edit them in the Widget section of the Customizer.
Loading Comments...
Comment
×
%d bloggers like this: